Tarun and I, developed Tag Admin extension for Visual Studio around 2 years back. Over a period of time, we got busy and the extension has developed few bugs, mostly because there were few changes in the REST API and we could not update the extension accordingly. 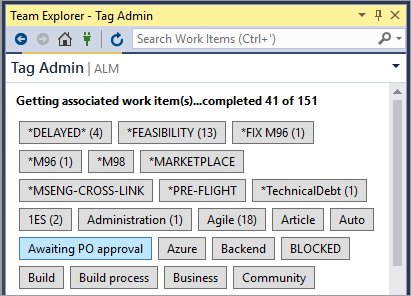 Download the extension from Visual Studio Marketplace. If you are keen to try out ‘under development’ bits, please download the VSIX directly from CI build

I just had to follow the guide and my extension was ready to be used with Visual Studio 2017.

Fixing existing bugs in the extension

Our Visual Studio 2013 and 2015 extensions used the REST API and we used to construct the URL’s required as per the API.

For Visual Studio 2017 extension though, I decided to use the new REST based HTTP client which made development easy. You no longer required to construct the URL’s. Most of the REST calls happens behind the scene.

Take for example the below code snippet to Get the Tags.

As you can see, the code is simple and also readable. So converting existing code to use new REST HTTP client went super smooth and it was easier that I expected.

So, please go ahead and try out the new version and let me know if you have any feedback.