In order to release software often and consistently, it is essential that software dependencies are managed using a good package management solution. Managing dependencies, if not planned well, can over a period of time become extremely difficult to maintain - especially due to difficulty in managing versions, testing of the packages and nested dependencies. With the increased focus from organizations to break monolithic applications into micro-services, teams have started to break their hard dependencies into manageable packages (NuGet, npm and others.)

Azure Artifacts is Microsoft’s solution to package management. Originally available as a separate extension on Visual Studio Marketplace, it is now pre-installed in Azure DevOps Services and Azure DevOps Server 2019, TFS 2018, and 2017.

This post was originally published on Microsoft TechNet UK - TechNetUK

Setting up Continuous Integration and Delivery (CI/CD) for NuGet packages is covered previously in my blog post and also in my recent book on Azure DevOps. There is also enough information about this in Microsoft docs.

However, I have seen most clients I have worked with struggle mainly after setting up CI/CD for their NuGet package. Without proper planning, managing and continuous delivery of NuGet packages become cumbersome.

This post tries to answer these questions and specifically shows how Azure Artifacts becomes an answer to all the above questions.

Refresher on setting up Azure Artifacts

If you have never used Azure Artifacts, here is a quick refresher on getting started.

Setting up artifacts is easy. Head over to Artifacts service and click on + New feed. You will be prompted with the screen below. 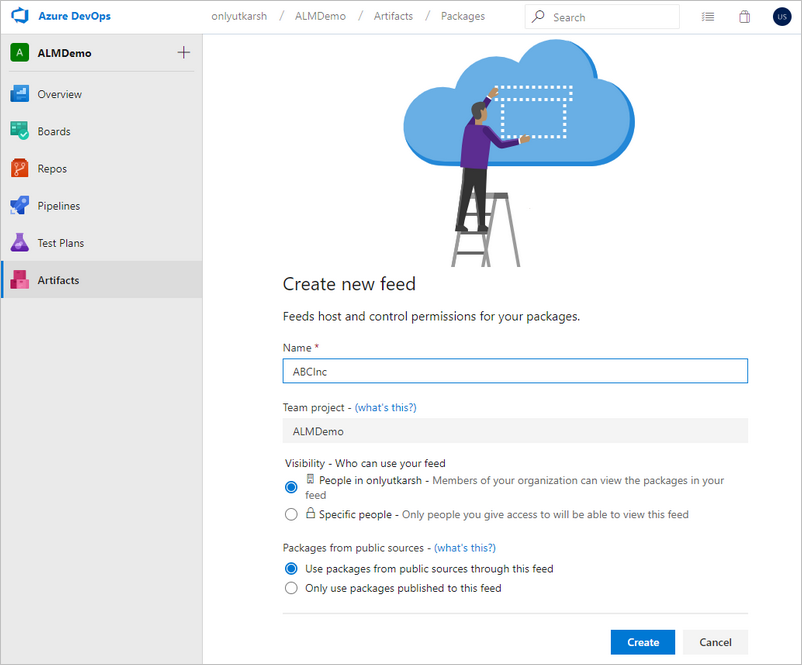 Ensure you also select Use packages from public sources through this feed option. This will allow Azure Artifacts to cache your package dependencies in Azure Artifacts so that they are available even if your upstream source npmjs.com or nuget.org is offline.

Once you create the feed, on the top right corner, you will see Feed Settings menu and clicking that will take you to a page where you can configure additional settings. 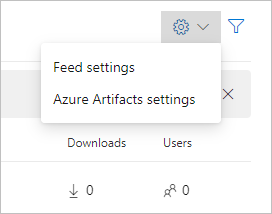 Inside Feed settings screen you can configure retention policies for your packages, add additional upstream sources etc, views (we will cover more about views soon).

For NuGet packages, at least for our organization, we decided to use GitHubFlow branching strategy. It is simple to understand and idea is that you will always have a stable master branch and all development is carried out in feature branches and merged back to master.

For effective working of GitHubFlow branching strategy, teams have to agree on following rules.

Typical developer workflow in our teams delivering NuGet packages is as below. 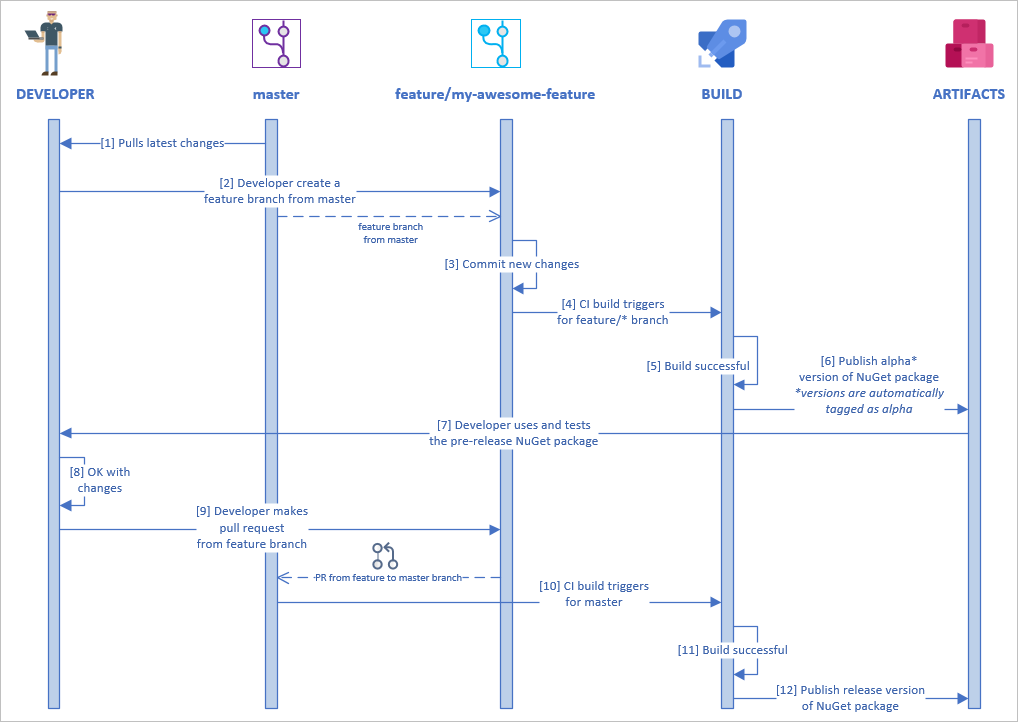 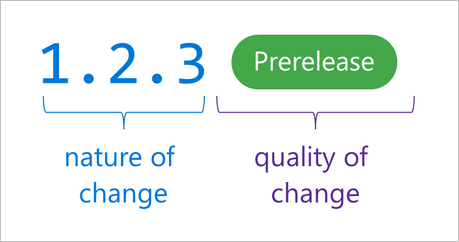 By using semantic versioning we can convey both nature (1) and risk of change (2). We use something known as a tag for conveying the quality of change (3).

It will be our practice that our NuGet packages follow versions in <major>.<minor>.<patch>-<tag> format.

Following semantic versioning notation requires developers to upfront decide what kind of changes they will be making (major, minor or backward compatible change) to NuGet packages. In a CI scenario, we would like to automate this versioning. We will soon see how we do it in our pipeline.

We use GitVersion tool to automatically follow our versioning strategy described above. The tool relies on a simple configuration file committed to the same repository as our NuGet code. This tool automatically determines the semantic version based on the commit history on the repository.

As you can probably guess from the configuration file above, we are using Mainline versioning mode. We then specify that our initial version for this repository is 1.0.0. Using mainline mode will also ensure that patch version is incremented every merge to master.

Next, using the branches section, we specify that for feature branches we tag versions with alpha string and for master branch we don’t apply any additional tag (so that the packages from the master will just have versions like 1.0.1 for example).

Although using GitVersion tool allows us to automatically version our build and NuGet packages, developers need to override the version as they will decide whether to update major or minor version based on the change they are making. They can do so using the following approach and GitVersion respects these.

This tool is available as an Azure DevOps pipeline extension. By installing this extension into your organization you will be able to use this tool in your Azure pipelines.

Link to the extension: https://marketplace.visualstudio.com/items?itemName=gittools.gitversion

Now that we know how our branching looks, what our versioning strategy will be, its easy to create the build pipeline to do that in Azure DevOps.

One build pipeline for all branches

As you saw in the developer workflow above, we need to build and publish a NuGet package for both master and feature branches. Azure DevOps allows us to use the one build definition to build for both the branches. We do that by going to Triggers hub in the edit mode of the pipeline and enable continuous integration. We also add Branch filters to include only master and feature/* branches. This will automatically trigger our build every time there is a commit in any of those branches. 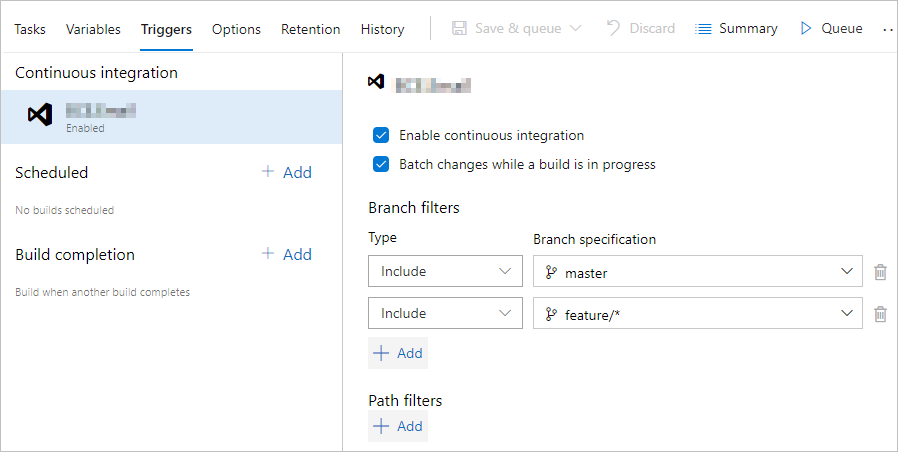 Steps in our build pipeline

CI pipeline for our .NET Core NuGet package looks as below. The YAML content of the full pipeline is as below.

Once you run the build, the versions will automatically be determined and applied.

Notice, commits from the feature branch has the tag alpha and builds on master branch does not have any tag as specified in the gitversion.yml file.

Another big challenge with traditional package management solutions is, as soon as you publish, the NuGet package is made available to everyone immediately. This requires consumers to understand semantic versioning and based on the version number figure out if something is a breaking change and then decide whether to use the package. This also slows down the developers of the NuGet package as they have to now make sure packages are thoroughly tested before releasing to the public. Azure DevOps helps you to solve it with a concept called as Views.

From the Microsoft docs,

Views allow to share package-versions that have been tested, validated, or deployed but hold back packages still under development and packages that didn’t meet a quality bar.

By default, Azure Artifacts provide 3 views: @local, @prerelease, and @release. The @local view is a special view and cannot be renamed.

You can apply fine-grained control on who has access to which views under Feed settings.

In our organization, @local is available only to developers and architects. @prerelease view is accessible for Testers/early adopters. Finally, packages in @release view are available to all the users of the organization.

For more on Security and Permission management refer documentation

Delivering and promoting packages in views

The workflow of delivering packages using views is as below. 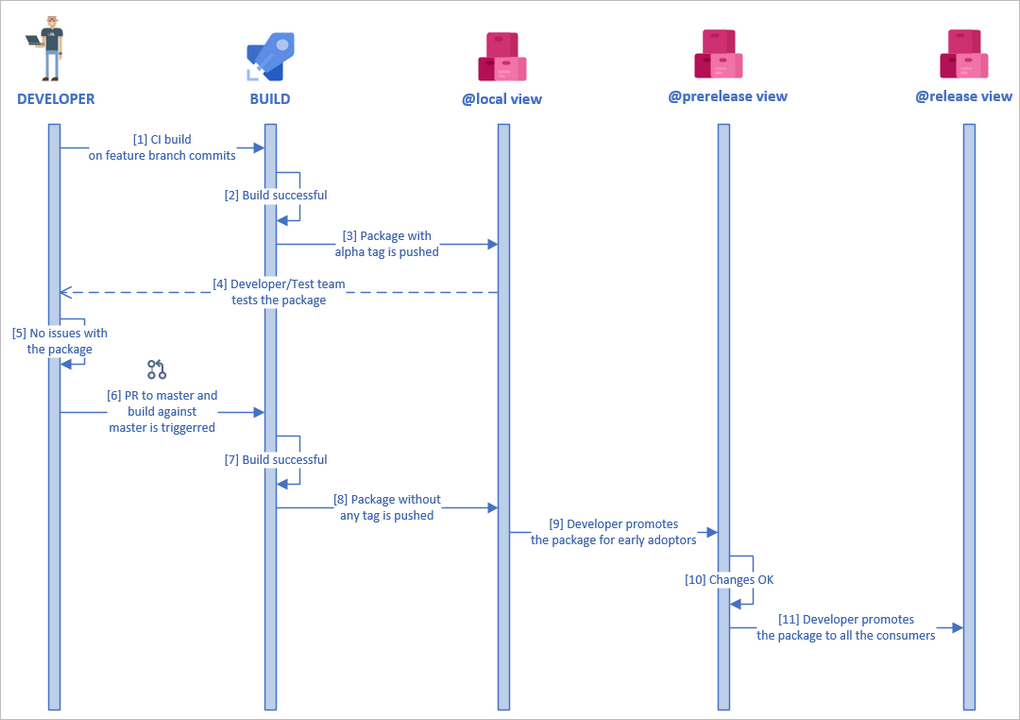 As you saw in this post, there are a lot of things to consider for faster delivery of NuGet packages in continuous integration scenarios. As you saw Azure Artifacts has lots of great features like upstream sources and views etc. to help meet your needs. With the right branching and versioning strategy, you can set up continuous delivery with minimum human intervention so that you can deliver your features faster.

I hope this post helped you answer a few of the other things to consider while you plan to deliver your NuGet packages.