If you have been an Visual Studio extension developer you know that there is not a well defined process to continuously deliver to the Visual Studio Marketplace. Couple of years ago, Mads Kristensen’s Extensibility Tools in combination with his https://vsixgallery.com reduced some pain where you could implement CI/CD to his vsixgallery, but eventually you still had to manually upload the extension to VS Marketplace upon your testing.

Fortunately there is a now a new command line tool called VSIXPublisher from Microsoft. With this tool we can continuously build and deploy our Visual Studio extensions using Azure Pipelines to VS Marketplace.

The VSIXPublisher exe is installed with Visual Studio SDK and also available via VSSDK Build Tools nuget. The command line provides us various commands to

In this post we will only be using login and publish commands. But you can see that tool also supports other useful features like create/delete publisher or delete your extension from marketplace.

For publishing an Visual Studio extension using this tool you will need a publisher id and a personal access token (PAT). For this post, I am assuming you already have a publisher id. If not go ahead and use the command line to create the publisher for yourself. For creating PAT, you will need to follow steps defined here

Preparing your extension for publishing

The first thing we need is to add a publishManifest file. This is a simple JSON file describing metadata of your extension. For more details on the structure read here

Notice that I have my extension overview page as “readme.md” (The contents of readme.md appear on extension home page in the VS Marketplace). And because I have few images referenced in my readme.md file, I need to add and correctly map all the referenced images under assetFiles section.

Next, verify and adjust other information like Product ID, Description etc in your source.extension.vsixmanifest file. For example, I added the Description and also added preview image which appear in the marketplace page. You can check the commit here.

Setting up the Build in Azure Pipelines (Continuous Build)

So I created a new build pipeline and added the GitHub repo as source. 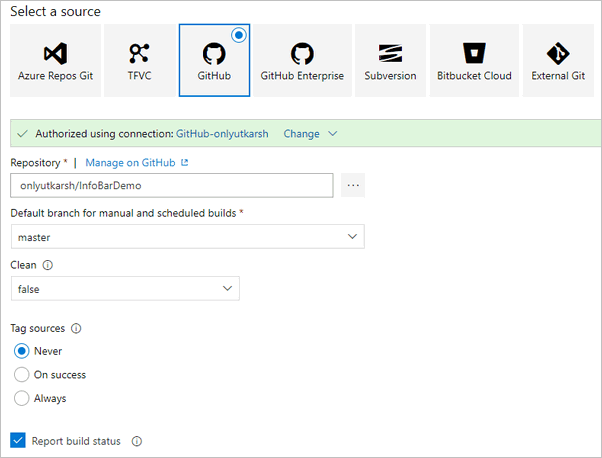 The next action we need to take is, adding the build steps to generate build artifacts to publish to marketpace. We will be publishing number of files as build artifacts - E.g. readme.md, VSIX file, publishManifest file etc. 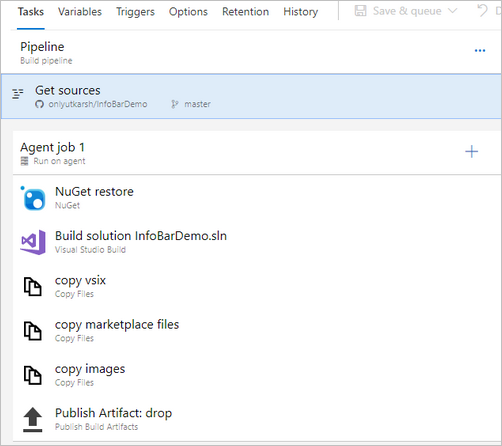 As you can see from the image above, I am doing following operations in my build definition,

For simplicity, I am not incrementing the version of the extension here, but you may also want to increment version each time you trigger the build.

The final artifacts produced by the build are like this. 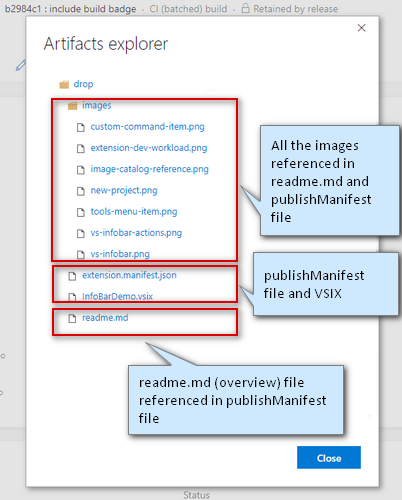 Setting up the Release in Azure Pipelines (Continuous Deployment)

Now that our build produces the artifact we need correctly, its time to set the release pipeline and publish our extension to VS Marketplace.

Head over to Releases hub and create New release pipeline. I have added a single stage called marketplace as below. I have added build output we created in previous step as an artifact. 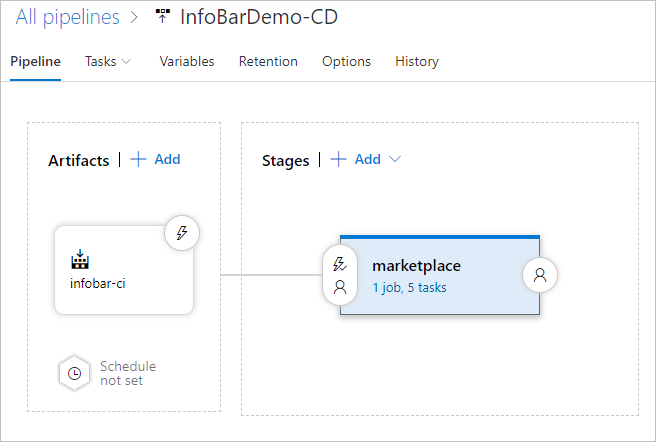 Okay, we now have everything we need, right artifacts and right agent pool to do our deployments. So lets add steps to deploy our extension. My deployment has following steps. 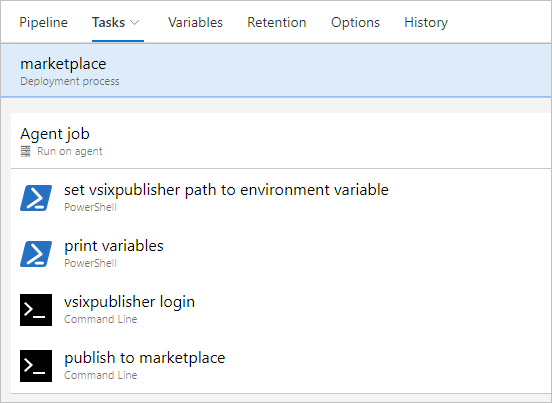 As you can see from the screen shot above, this is what I am doing in my deployment.

The Powershell used in the task is as below

In the last two lines of the code, I am dynamically generating two pipeline variable using logging commands. The critical line to note is, in the last line of the script I am setting the complete VSIXPublisher.exe path to a variable named VSIXPublisherPath.

So I add my PAT token and my publisher name and add them as Pipeline variables so that they are available for pipeline tasks. I made sure I mark my PAT token as a secure variable so that it does not show up in the deployment logs.

If everything went right, during deployment you will see the login successful message.

When I ran this command initially the deployment did show a warning of type VSIXValidatorWarning03 as shown in screenshot below. The warning was that my extension does not derive from AsyncPackage. This is a valid warning, as starting with Visual Studio 2019, synchronous auto loading of extension will not be supported. 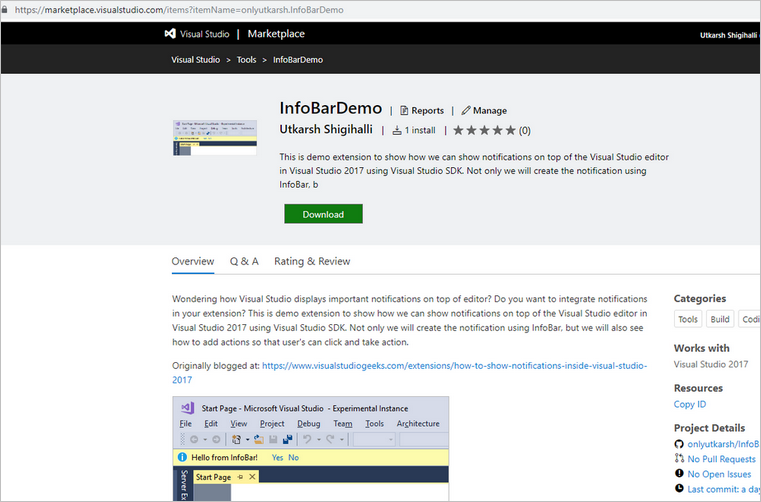 See my Demo extension on the VS marketplace here

I am working on transforming this in to an open source marketplace extension so that its easy to consume. It will hopefully also make others to use it as is without passing parameters/creating variables. I will post an update once the extension is avaiable.